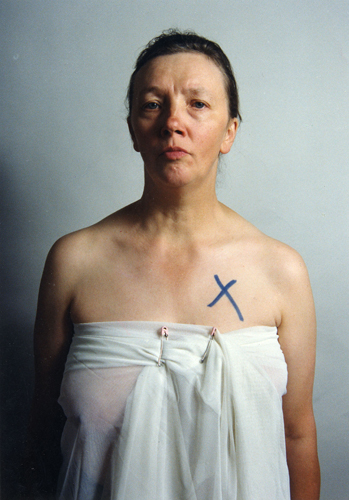 There are many different theories and techniques, and whilst some of them make full use of the discipline of photography (ie. client and therapist engage in photographic sessions together), others merely use photographs as a finished product.

On this page: #Re-enactment#Creating a positive body image #5techniques

They were two British photographers operating in London in the 1980s.
They developed a practice they initially defined ‘Re-enactment Phototherapy’. At the base of this was a new look at the family album, such as could be found in their households.

Around 1980 Jo Spence was diagnosed as having breast cancer. She responded to her disease and treatment through photography, channelling her feelings about breast cancer and orthodox medicine.
“Through Phototherapy she tried to regain the individuality that the cancer treatment had robbed her of”. (C.Hagen: 1991)

On close inspection the family album appeared to be most revealing in its showing of absences, rather than presences. Absences not only of people (who is taking the photograph? Who has been excluded from this particular family group photo?) but also of the multitude of identities which had been left out in favour of a single, elected, iconic image.

They started by analysing the client’s perception of themselves and questioning any construction or assumption which might have been put upon the client in their vision of themselves. Then moved on creating images that explored the multiplicity of their identities.

Analysing the family album brings up the issue of construction of identity, and who the creator of this construction, the creator of meaning is. Once this is identified, therapist and client go on to explore the client’s history from the client’s point of view. The narrative changes from clients ‘reading’ the family album as a story of their lives, to them creating the narrative, and telling their own story.

As well as the re-enactment Phototherapy, another technique used by Spence and Martin is exploring the family album. Clients bring to the session some photographs from their own family album which are particularly significant for them, and these are used, amongst other things, to bring back long-forgotten or buried memories. expanding the possible readings.

Her Phototherapy work dealing with her illness raises several important issues based on her experience of cancer treatment, offering a unique insight of a patient’s perspective for those in the medical profession. She was particularly interested in the power dynamics of the doctor/patient relationship and the role of the healthcare institution in the infantilization of patients. Jo Spence responded to this by deciding to document what was happening to her through photographic records, thereby becoming the active subject of her own investigation, rather than the object of the doctors’ medical discourse.

On this page: #Creating a positive body image #5techniques

The New York based photographer helps women overcome the poor body image that springs from eating disorders and sexual abuse. She has also worked with cancer patients.

Women start the photographing clothed and disrobe during the session.  Phototherapy is about how women take back the appraisal of what is beauty. It uses a woman’s multiple images to shift her negative self-perceptions. By being seen and not judged, by being photographed nude and seeing what they’re most afraid of seeing, women have had the opportunity to reconstruct how they see themselves.”

The idea is that by showing women suffering with anorexia, bulimia, and over-eating difficulties some well made images of themselves, she can help them accept their bodies. “Even if there are just a few frames that a woman likes,” says Turk, “she will think that there must be something lovely about her.” (E.Fisher-Turk:2011/a)

Apparently the idea originated when Lisa Berkley (the photographer’s partner), a rape victim, approached her friend asking to pose naked. She hoped that seeing her body in a new light might improve her self-image; that a nurturing photo session would erase negative feelings she had about her body having been violently “captured” years before.

Fisher-Turk says : “ It soon became apparent that how I saw her was different from how she saw herself. Gradually she started describing herself the way I would.”It worked, and gradually the camera changed the way Berkley saw herself.

Ellen Fisher Turk has since used the same technique with more than 100 women. The New York photographer is now helping other women confront their problems and develop a more positive image through photography and journal keeping; in some cases, this method appears to be succeeding where traditional therapy has failed. (A. Worden:1998) ”

On this page: #Re-enactment #5techniques

In most of Judy Weiser’s Phototherapy techniques the printed photographs are used as external objects to help the (qualified) therapist bring out the client’s internalised reality. As she herself has explained, “ A person searching for the meaning of a given photograph will never be able to find the truth it holds for anyone else. In this supposed limitation lies the power of snapshots as therapeutic tools for accessing unconscious feelings, thought, memories, personal values, and deeply held beliefs.” (Weiser:1993)

Weiser started life as qualified mental health therapist and began incorporating photographs in her practice quite by chance at the beginning of her career, whilst training to be a counsellor, when some of her photographs taken as a ‘hobby photographer’ were being exhibited in a local coffee-shop gallery. On engaging in conversation with some people who were discussing her photographs, and realising that they didn’t know she was the author of them, Weiser started asking questions about the pictures: “I started asking them about which picture they liked and why the liked them, what they thought that people would say if they could speak, which one they’d like to bring home and why and which one made them laugh… I was so amazed by how differently thay saw my pictures that I got more and more intrigued”. (L. Granato: 1998)

Weiser’s techniques are based on the very strong reactions that clients often have when confronted with images. Most of her techniques are based on client and therapist looking at photographs together and talking about them, but sometimes in her practice some photographs are taken, mostly self-portraits of the client. Self-portraiture is not just used literally: the client might be asked to take pictures of objects or ‘things’ which represent them, or – in the projective technique where therapist and client look at many pictures together – the client might be asked to pick a photograph which they feel really depicts them, from a pile of pictures on the therapist’s desk.